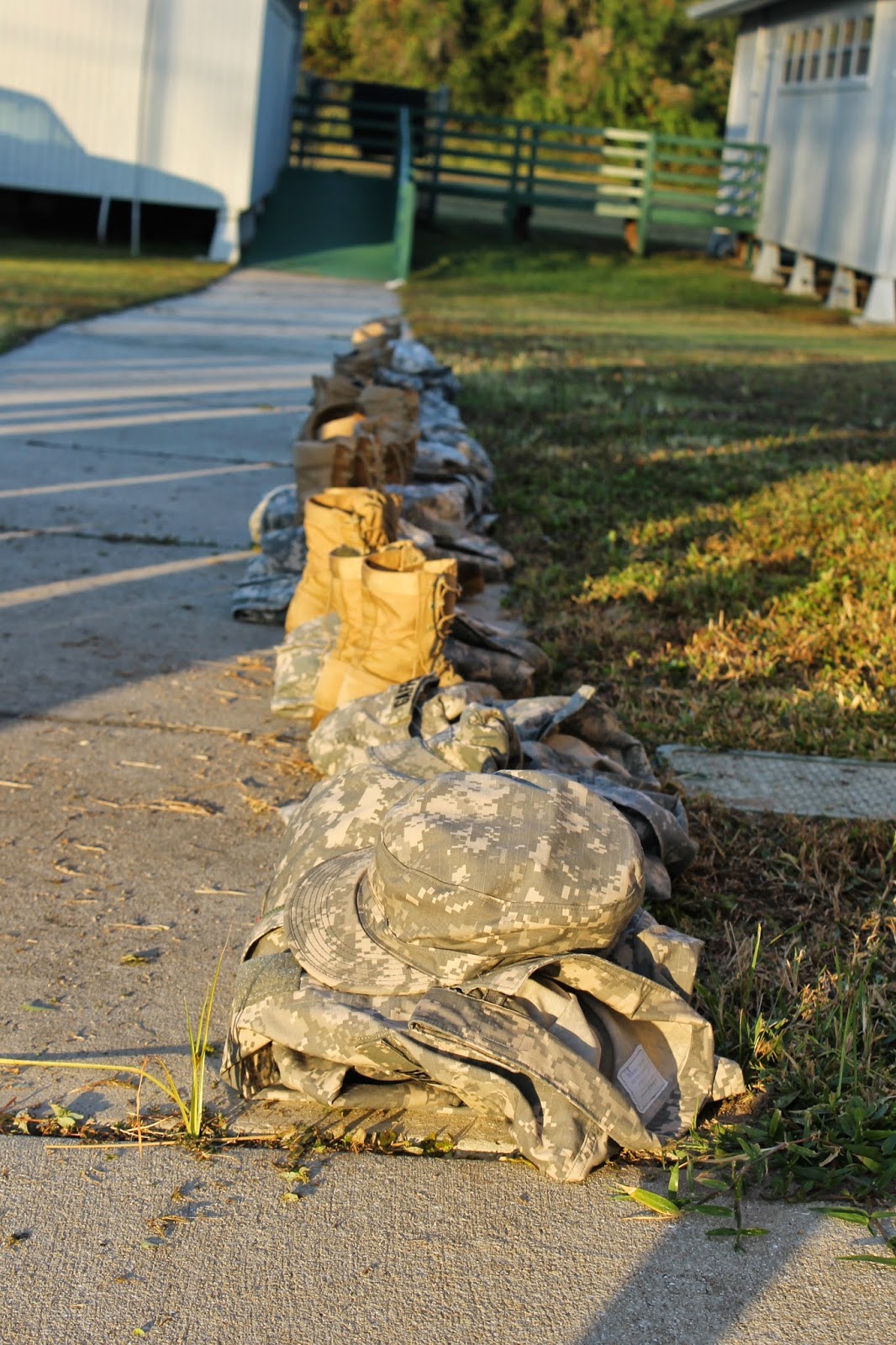 Most of the dwarfs "talk" a lot about what they want to do when they grow up.  Being a professional athlete, a veterinarian, a mom, a life time learner, a hobo.  But talk is cheap as they say.  In order to obtain a goal, one must be passionate, motivated and focused in where they want to go, and on the path to get there.  One of the dwarfs has talked since she was 10 about a life of service in our country's military.  While we thought that it was a passing phase, we have come to the conclusion that after five years, perhaps there is a bit of motivation, passion and focus for Sleepy regarding this dream.  When we lived in PA we heard the rumors of JROTC programs, but because of funding cuts there were no local programs, not even one in driving distance for her to consider.

Fast forward to March of 2014.  After much prayer and consideration and more prayer, our family...that was firmly planted in Pennsylvania, prepared to pull up 40+ years of roots and transition to the sunshine state.  Immediately we began to pursue the school options in the area as we still had six dwarfs requiring a secondary education.  We looked at private Christian schools, of which many of the dwarfs were very comfortable and familiar with, as well as charter schools.  Sleepy immediately latched on to the Sarasota Military Academy as her school of choice.   We made appointments, filled out applications and paid registration fees.  She was ecstatic! A school that she could attend that would afford her the opportunities that she had been dreaming of for years!

Through a series of events, we ended up enrolling our 5 eldest dwarfs in the local public high school.  Sleepy was on the fence about this decision, but the swaying factor was that they offered JROTC as an elective.  She filled out her form for registration, with JROTC as her first choice of an elective, confident that she would be placed in the program.  The first day of school arrives and she is nearly in tears to find that she did not get placed in the elective of her choice.  After a series of meetings and moves to her schedule, we were also able to get her a space in the program about two weeks after the start of the school year.

The rest of the month of September and part of October were a blur as she found out that there was a competitive side to the program called Raiders.  It seems that all at once she went from a dwarf with nothing to do, to a dwarf that I needed to keep a tracking device on so I knew where to pick her up at the end of each day.  She had committed to basketball training, had started working out with the Raiders, and was interning at the church in the youth program.  Some days she would leave the house at 7am, attend classes, attend Raiders training, head to the gym on campus for weight training with the basketball team and then attend practice  until 8PM with the basketball team.  We began to see her joy slipping, and cautioned her about being in over her head.  As her parents, we asked her to pray through where her commitment should be and how she should prioritize spending her time.

During this time she was convicted to go to the basketball coach and her Raiders instructor and inform them that she could not practice on Wednesdays as her internship at the church had to be her focus on that day of the week.  Jesus came first in her life and that it was because of Him that she had the abilities that she did to do the other activities she enjoyed. She was informed that she would not be able to play in any of the fall ball games because they were on Wednesdays.  She never blinked an eye and kept faithfully attending practices through most of September and early October.  But she was still weary.  Finally, she came to the Prince and I asked if she could drop basketball. (rabbit trail for a moment) If you know us at all, you know we LOVE basketball at this house.  The prince coached for years, I have coached for years,  all of our kids but one, have played, some for years! Heck,  I played in a 3 on 3 tournament when I was 6 months pregnant with our eldest dwarf .... ouch ouch ouch. Drop basketball??? The reality was that she could not keep going at the rate that she was, and something had to go, so basketball it was.

What she has done in her time since downsizing her activities and becoming focused on just the Raiders program and her internship at the church,  has shown me that she is already at 15 a stronger, more competitive, more compassionate, more humble, more gracious a young woman than I could have ever hoped for her to be.  I look at her in amazement when she arrives to my car at the end of practice, covered in dirt, sometimes blood, and sometimes in tears and think, "crazy girl... but boy that is some dedication".  I see her with her peers working together, encouraging one another, supporting one another, and am grateful for her maturity, and her ability to see and understand that this is not just about her.  There is a bigger picture. Relationships to be built, and a goal that individually, on their own, they can never achieve outside of the team.  I would be remiss, if I did not mention that while these students, in the 9th -12th grade are the ones physically doing the time and putting forth the efforts, clearly they are blessed with some great leadership.  Instructors that give their best to these kids and their job each day. Instructors that know how far to push to get the maximum results,yet know how to be an encouragement when the kids are "off their games".  As we were transitioning here, one of our biggest fears was taking the dwarfs from the comfortable cocoons that they had built up for themselves and dropping them into the unknown.  Our fears for the most part have been unfounded.

I do not have any experience or  knowledge of what is going on at these competitions, but I am learning.  It is fun to explore and experience these things with Sleepy.  Rope bridges, tire flipping, sandbags, liter carries, 5K's, well to be honest it all seems a bit intense to me.  However it seems to bring her great joy, and satisfaction! While the Prince spent  time  serving our country, it was before we were married, and I was oblivious to most of the details of the military life,  as my focus was relegated to running to the mailbox each day, looking for a love letter or a picture of his handsome self in uniform... so to say I have a lot to learn would be an understatement. I am slowly piecing it together, and figuring out!  Sleepy is young.  What her future holds is yet to be determined.  But for the girl, living her dream, it has been a great joy to watch her grow where she has been planted.  Bloom in the midst of struggles and difficulties of the transition, and rejoice with her in her in her triumphs!

It is in the moments such as these that I am so grateful that I don't have to make this stuff up!
Posted by Malingle at 6:13 PM