I have never been a fan of Halloween

I have never really been a fan of  Halloween. Understand when I say Halloween, I mean trick or treat.  Even as a child, there was so much energy and effort put into getting ready for the holiday, and the build up just never met with the reality.  We had cleaver costumes, and my parents bought candy, for the ghosts and goblins that came by our home.  One parent always stayed behind to hand out treats, and the other put us in the car and drove us from house to house since we lived in a rural area.  At the end of the night, every one returned home in less than a happy mood, because of falling on a dark driveway, or a costume that failed the" in and out" of the car 20 times test, or we wanted to go to "just one more house" but that one more house was another 4 minute drive, in the opposite direction and the driver wanted to just go home...

Of particular interest to me and my most vivid memory was the year that my brother was the Incredible Hulk, and my mom made him a great costume, however the green food dye she used on his hands and face and neck, stuck with him for a while! I did wonder why after his shower he was more red than green, but now that I have children of my own, I am sure my mom scrubbed his arm neck face and hands until the were red, trying to make the green fade!    I have a great clown costume, and perhaps this was the year that I wore it, but it currently sits in my collection of childhood memories that I know my mom lovingly made for me, but have no memory of ever wearing it.

So when it was time to start a tradition with our own family, we started out with Doc.  Born in January, I had plenty of time to consider her first costume.  I do believe that it was a very traditional baby pumpkin suit that she adorned.  But again, I am a bit fuzzy on the details, because who in their right mind actually goes out in search of candy for their 10 month old?  I think we may have driven to my parents (because we are still living in a rural wooded area of my childhood) and oohed and took some photos.

I recall the next year, she was walking and she was a shark.  But again, I do not remember if we even went out on the great candy search that year.

After that I have no more recollections of Halloween costumes or outings aside from a very ambitious sunflower costume that I made for Doc.  I spent a week crafting the petals and the hat that fit easily over her head and would bear the weight of the sunflower, searching high and low for a  green sweatshirt that would be the perfect shade of green for the the stem, and when the day arrived for the Halloween Parade at Preschool, she refused to wear the costume!  She refused to march in the parade!  She refused to go out trick or treating!   She was just a stem!

If I were going to be honest, this is when any of my love of the holiday left me.  Add a few more children, 6 to be exact and over the next 15 years, I just scrapped the idea. We would take the kids out of school early so that no costumes were needed for the all school parade and we would go to dinner or the movies or bowling on trick or treat night, and avoid the chaos.  I could take 7 kids out for dinner for less money than I could spend creating the perfect costumes and shuttling them around for buckets of candy that they did not need, or than what was good for them.  We would take them to the store and let them each select their favorite candy bar. I would even let them eat it all in one sitting,(I know, shocking to you that know my aversion to having junk in the house.), in an effort to fill that need that they thought they had for candy.  You may be wondering what was the issue.  Why do I not like Halloween and trick or treating?  Was I some zealot that thought the holiday was evil, or to frightening?  Was I a parent that was protecting my children from "glamorizing" the dark side of the holiday?  Nope.  Not at all, I was a parent who was opposed to 7 candy baskets full of a food group that was of no value to them.  I was a parent that was opposed to dropping $19.99 (or more), times 7, on costumes that were made of poor quality and would rip before getting out the door which lead to tears, and the someone having to go to the bathroom and then to someone's feelings being hurt... In a herd stuff just happens.

Then an amazing thing happened. The rules of trick or treat as I recalled them from childhood, took on a new twist.  Kids were trick or treating later in life.  During my childhood, no one went out in costume after their 12th birthday. In my mind I was figuring my kids were to old, save one, to go out trick or treating.  Once we moved to our more suburban housing development, I let the kids hand out candy, and I noticed a distinct shift in the size of the kids coming to my door.  I thought these kids look older .. like the age of some of my dwarfs....  so  I looked at my dwarfs and thought, they could do this all themselves this year.  I would have to do nothing.... they can all walk, and if they start to meltdown I can send them home...  The year was 2009.  As previously mentioned, we had moved to a new neighborhood the year before, and at dinner, 30 minutes prior to the community trick or treat event beginning,  I looked at the six kids around the table and said,  "Hey... anyone want to go trick or treating tonight?" Our youngest girl dwarf literally had NEVER been out and she was 12.  To say they were surprised, would be an understatement.  Then it started and I thought I was going to lose control of the group...the "I don't have a costume, I don't know what to be or do..."  Quickly, I laid the ground rules...  you may go out trick or treating if you pull together your costume on your own, with a bag to carry your sweets in, and be on the front porch in 30 minutes.  Almost all were in agreement.  It was a fun time for them, we even have this photo (curtsey of a neighbor)as documented proof of 5 of the 7 dwarfs went out for the adventure.  They talked about it for days, as they started making their plans for the next the next year. 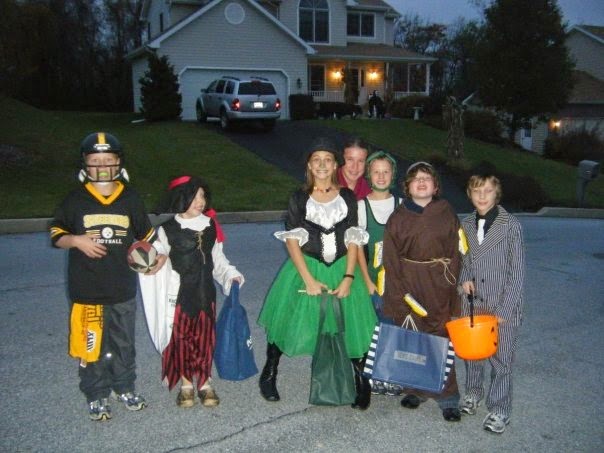 I was still not a fan of the obnoxious amounts of candy with no perceived nutritional value, so we
solved the problem by combining it all on the table. Everyone picking out a few favorites and the remainder was donated to a local charity.  (I am aware that many find candy to be a staple in their home, so I do not mind donating and that nothing went to waste.)

This year, we are in a new area and  while I am sure, according to the articles I have been seeing on the internet, my kids still all fall into the realm of acceptable age and size for trick or treating... However, we opted to try something different this year.  While I think the craze was starting at home a few years ago, we had never really gotten into it since our kids were older, the ingenious idea of  trunk or treat events.  A safe place to take the family for candy gathering, game playing and fun. So this year we determined that the kids are all old enough and big enough to help out in the spirit of the  holiday by serving others.  Really who doesn't like to dress up, and play games and hand out candy?    I created a trunk design for our 15 passenger van, and loaded up all the children, drove to the school parking lot where the event was being held, and the kids and I spent the evening serving the community - handing out candy, manning game and food tables and just enjoying the holiday in a new way. 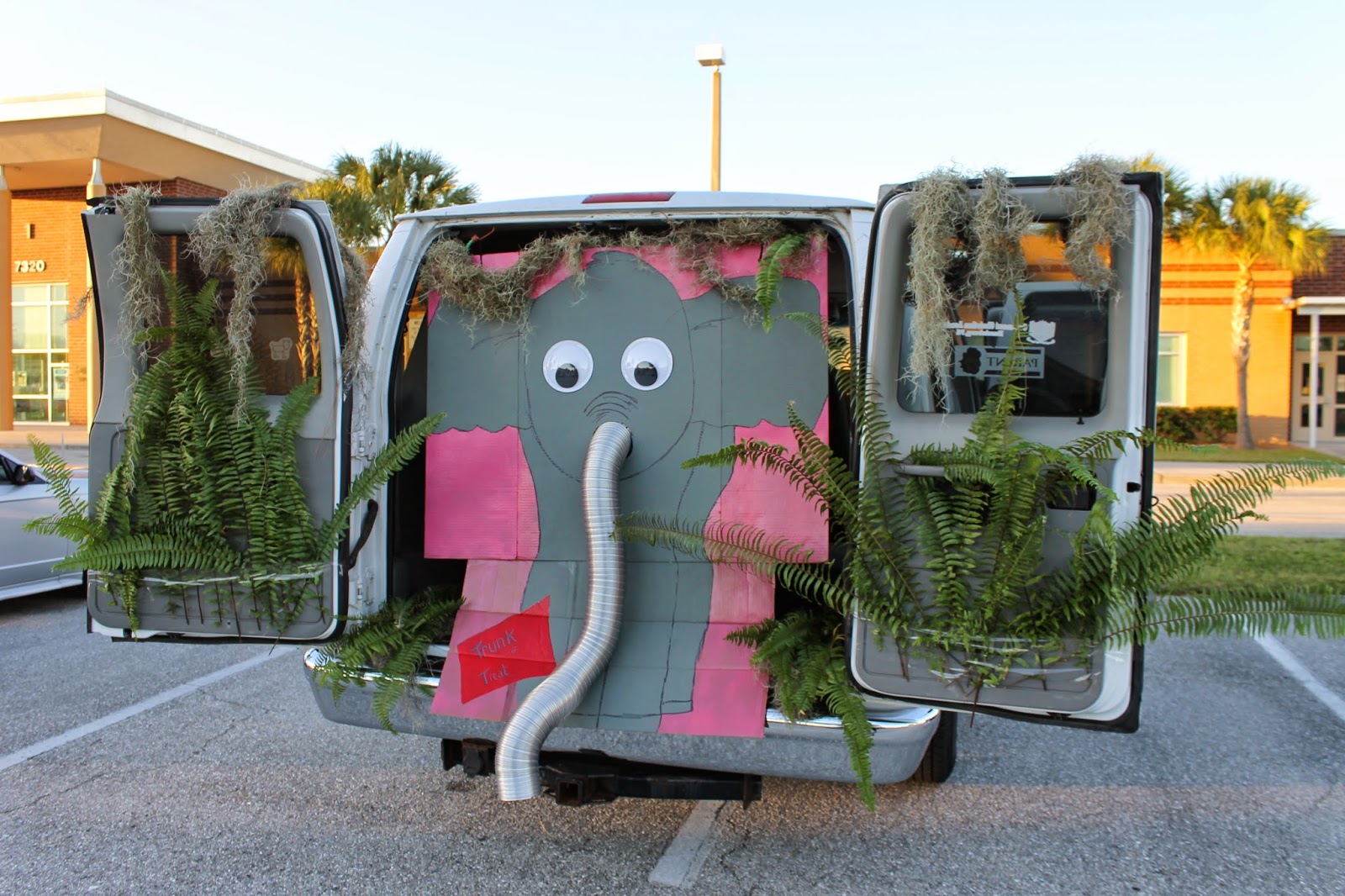 The look of joy on the faces as children of all ages, yelled "Trunk or Treat" at the elephant's trunk or his face, and a piece of candy (or three) fell out of the trunk right into their basket, bucket or bag, was worth the brainstorming and painting and creativity that went in the creation of our trunk.  I believe that if these events would have been popular when my kids were little this is the type of thing that we would have done.  There was free food, hot dogs, popcorn, cotton candy.  There was live music.  At least 20 cars were decorated and set up all handing out smiles and candy.   It was a safe place to for parents to bring their kids.  It was simply good clean fun.  It goes to show that an old dog can learn new tricks, and that while my stance on Halloween is still the same, I am still not a huge fan, it is simply a lot of work, and I would love it if there was something else to give away besides candy. The future looks a bit brighter for my grandchildren...especially if Trunk or Treats are still popular when they are ready to head out to celebrate Halloween!

You really Can Make up a Elephant trunk design for the back of your 15 passenger van, if you are a fan of Pintrest and have some spare time on your hands!