They say, "Sometimes even a blind squirrel finds the nut."

Much of our life spent parenting children, the typical and the not so typical, has been filled with quick change in directions, attitudes, and drama. Trauma to triumph in a minute, or vise versa,  so when a moment happens that makes us stand back just shaking our heads, with a small and crooked smile, on our faces that are a mix of joy, bewilderment  and a dash of "did this really happen?", well it just needs to be shared.

Understand this moment in time was an accidental victory.  Not one thing about the way this unfolded was "appropriate" or pleased the Prince and I as parents.  It went against all the safety nets and rules we had set up for this dwarf.  Yet in the end, amidst the sneaky behavior, the lie and finding out the truth, this dwarf caught a victory, and a rash of "what for " from the Prince and I.

This is the tale of how even a blind squirrel can find a nut.  Our dwarf Happy will live with us forever as we are his legal guardians. He is 21 is diagnosed ID.   He has celebrated some wonderful milestones in the last year,  which included landing a part time position doing what he loves, landscaping. Yes, even in the hot Florida sun. That job has lead to a occasional work  mulching and mowing in our neighborhood.  He has sustained continued employment at his main job at a local grocery store for going on three years now.  He graduated high school.  He got his first cell phone.   He turned 21.  He has picked up a hobby, wood burning, and it turns out is very skilled at it!  He volunteers twice a week at our church to help with sound for events.  In all a stellar year for the dwarf!!

Out of all of the above mentioned milestones, the item that has honestly given us the most problem has been, of course his cell phone usage.  The prince and I have been pretty tireless in trying to monitor and delete and discuss things that we see in text messages, on internet searches and the apps he uses that are just not socially acceptable.  Learning the appropriate rules for snap chat, and texting is difficult to navigate typically, but when you miss cues socially it can be really tough.

Often on the app Let Go, and similar sites and apps, we would see him bartering with people for items they were letting go by posting for sale,  in ways that were not only a waste of the sellers time but also were getting him bad ratings on the site for not showing to look at items he claimed he wanted to purchase etc. He would offer all the money in his account $46.29 for a $200 item, or he would barter with them in other unreasonable ways like trade offers of things he had.

Unfortunately, another one of this particular dwarf's challenges is lack of comprehension about money. Truth be told most young adults suffer with this one.  But for Happy, this is a hot topic at least once a week.

Three Sunday's ago the prince texts me while I am at work.  He says did you know that Happy bought a scooter?  "What?! NO!!"   He proceeds to tell me that Happy came home from church on Sunday afternoon riding a motorized scooter.

When the Prince inquired about the scooter, Happy indicates that someone dropped it off for him to "test ride".   But it seems suspicions that Happy is not riding back across the street to the church to return it to anyone.

The Prince pulls up Happy's bank account and finds that his account is overdrawn by $550.  Now remember to Happy there is not much difference in his mind between $10 and said overdraft amount.   He regularly spends more than he makes.

The Prince confronts Happy about the lie, the overdrawn account which indicates no one is waiting for him to return the scooter after a test ride,  and for yet another time, speaks to him about making purchases of such grand proportion without discussing his desires to do so with an adult.   Not much sticks from that conversation, as it is clear that Happy can only see visions of freedom in his eyes as he tries to focus and listen to his father.

Understand, the Prince and I have been talking about the potential of getting Happy a golf cart, or scooter for small trips around the neighborhood and for him to get back and forth to work.  However we have not mentioned this to him yet, as the situation is a bit more complicated in the fact that Happy can not get his license, he will always live with us as we have legal guardianship of him for life, and we have not done any research about what is acceptable in Florida for use in the bike lane.

Sunday, the scooter is affectionately referred to as the "$550 paper weight" as we are not going to allow Happy to ride it until we find out what the law is.    It takes the Prince a few days to sort out the Florida law.  And wait for it... this is where Happy lands on the good side of all these bad choices.  Drum roll please.... according to Florida law if you own a motorized scooter and it is a 50CC machine, you must register it, you may not ride in the bike lane, and you must have a valid drivers license.

Happy's new acquisition?  Well this is the victory!  He unintentionally purchased a used scooter, behind our backs without the assistance of a sales person that would know the rules that was a  49CC machine...  Because it is a 49CC machine he can ride it unregistered, unlicensed anywhere that the speed limit is 25mph,  or any roads of greater speeds that have bike lanes!  As the Prince learns the rules, suddenly the scooter becomes a significant victory for our dear dwarf.

With this purchase he can now drive himself to and from work. He can ride to and from church.  He can run for dinner, grab something that he needs at the store and last night he and friend even went to the movies. And while the distance was less than 5 miles from our home, the dwarf at 21,  finally has a great sense of freedom, pride in ownership, a feeling of being one of the guys.  Really, it makes a mom's heart swell! Well that swell is a little bit of anxiety truth be told!

His job coach shared that at his work, people are noticing that he has more pep in his step, is working harder, and seems to be boosted by this positively "accidental" working out of his unauthorized  purchase.  He rides to his job, locks the scooter to the bike rack and takes his helmet to the break room.  He offers to run small errands for me, and today he even went for a haircut, that he scheduled on his own!

If it were up to the Prince and I, we would most likely still be in the research stage of this idea to get Happy some independence.   While I have once again blocked all re-sale apps from his phone, and Ipad, and have been diligently checking for inbox messages from Craigs' list sellers,  it seems that this purchase was a great deal, (it came with the full size helmet ) he was not taken advantage of, the price was fair and the person he bought from was on the up and up!!

Happy has made a large step forward in being independent and is starting to enjoy some additional freedoms!  I make him keep his GPS on at all times!  He has to check in before leaving anywhere, and has to report to us when he arrives at home or another destination, but so far he is following the rules of the kingdom and those of the Florida bike lanes!! 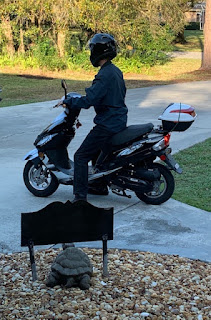 Happy is currently living his best life ever! You can't make this stuff up!!!