The City of Pucullpa, the Ucayali River and the Shipibo People

This is harder than I thought it would be, putting my thoughts in some organized fashion, describing and detailing our time in Peru.  Literally, so much share and chronicle, and as my mind spins in countless directions regarding all the ways in which I could present the information, by day, or by sight, or by adventure... I am just going to start with our arrival to our service portion of the trip that began on Sunday, July 9th.

We flew into the city of Pucallpa, population around 100,000 persons, located on the banks of the Ucayali River.  Founded in the 1840's by Franciscan missionaries.

We departed from the airport as a team with our luggage on one bus and ourselves on another, through the streets of the city to the river bank, where we were greeted by our home away from home for the next five days, the Evangelista.

We unloaded from the bus, and took our luggage on board, walking down a slight embankment to the wooden gang plank and on to the boat. 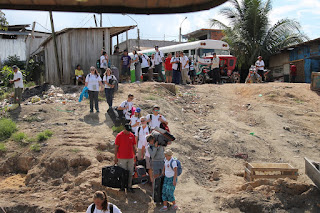 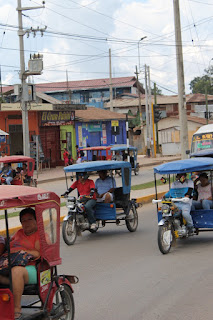 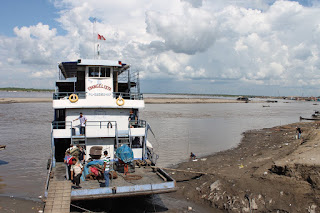 Once we were on board the boat, we received our life vests. (which we were required to wear in the harbor, and had to know where they were at all times once outside the harbor.)
The team enjoyed a few moments taking in the sights of the city, as we traveled by bus, but even more so once we were on the boat. 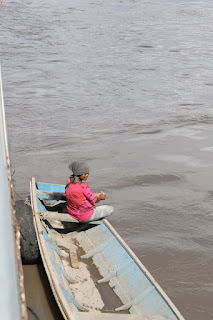 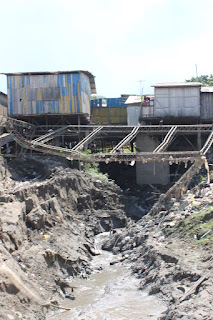 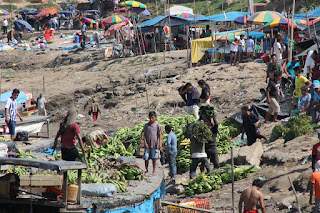 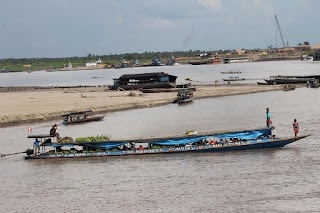 I wish I could show you a photo of the elusive Amazon River Dolphin, or the pink dolphin, but alas while I witness them dropping into the waters briefly after a sighting by someone else on the team that yelled for us all to look,  all I know about them is what I managed to research.   The Amazon River Dolphin is a real thing.  It is has a pink tint to its gray skin,  and has some serious mythology behind it.  There are only a few places in the world that claim the pink dolphins in their waters; South America, Bolivia, Brazil, Columbia, Ecuador, Venezuela and of course Peru.  Some of the myths that surround the dolphin include, but are not limited to: If you make eye contact with the dolphin, you will have a lifetime of nightmares in your sleep.  It is also said that they are guardians of the Amazon Manatee and if you desire to find a manatee you must first make peace with the pink dolphin.  It is unknown how many of these animals are in the waters, as the water is thick and murky, looking like a watered down version of chocolate milk, or never ending muddy water run off after a big storm.

Our journey down that Ucayali River was a long trek.  We were told that it would take nine hours to arrive to the village and that we would have to stop for the night once the sun set.  The Evangelista like the other boats on the river have no lights, so all boats are prohibited on the water after sundown. 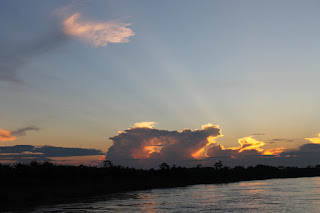 Of course we were not disappointed by our first sunset and its splendor on Sunday night!  While I think many of us were sad that we had to stop for the night, which would only delay our arrival to the Shipibo Village of Vista Alegre,  it was just one of many ways that we had to exercise our flexibility on this this trip.  We shared dinner and were blessed by Riccardo and his son Levi and their team with some games, songs and a devotion on board our first evening. 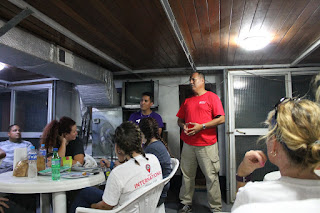 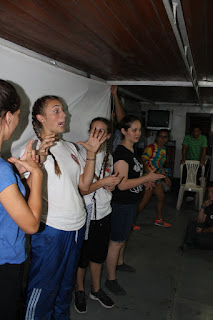 Monday am, Morgan and I were up on deck at 5:15 am to do our quiet time and wait for the sun to rise.  Sadly, for us, this would be another opportunity for us to exercise our flexibility, as we were delayed in our departure a few hours because the sunrise was a fog rise... and again, lack of lighting on the boats caused us to sit still for a large part of the morning.  There were cheers all around as the engines began humming and we were chugging back up the river.

There is no way to describe the site that met us when we arrived at our final destination!  We were greeted by the Shipibo villagers and a group of ladies dressed in traditional Shipibo clothing.  All waving and cheering at our arrival!  There was music playing, and we eagerly awaited the gang plank to be placed down for us to go greet this village and its people! The ladies, to the best of my understanding, are a group of villagers that stand as part greeting committee, and dancers and singers that are used in celebrations (such as our arrival) and the dedication at the church days later.  Their head bands showed the name of their "group" LAMEC, which is an acronym, but for what I never got a clear answer.  The song, we referred to as the "song that never ends" goes on as everyone dances in a circle holding hands, and swinging your arms back and forth in a wide downward arch, occasionally, rotating the the direction of the circle, or taking steps in while lifting your arms high, or taking steps back while dropping your arms.  Eventually, they form an inner circle, and I was honored to be part of that small group.  I am not going to lie though, it was hard to keep up with their enthusiasm and pace, and additionally as you can see, I am much taller than these lovely women, so I felt like they had to work extra hard to get me to move in the right direction, and make my arms do the correct moves.  But their welcome so sincere and contagious!  What an awesome experience! 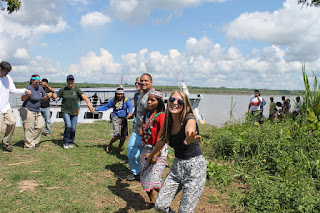 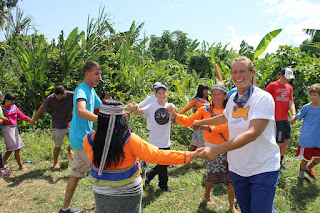 The Shipibo people are a group of indigenous people that live along the Ucayali River and have approximately 150 small villages up and down the shore line. In conversations with Riccardo, via a translator, I understood that there are many many villages that have not yet been reached along this river.  Additionally, on the second day of our trip, a small portion of our team went to another local village, that required them to take "locals" with them to gain admittance, and walked through the woods that to the mere observer would not look like a pathway to anywhere, much less a village of people.

The proper term for this people group is the Shipibo-Conibo  people group as these two indigenous people groups over the last several years have combined through marriages to become one.  This particular village was a little larger and was made up of 625 families.  It had been 12 years since any Americans had stepped foot in this village.  We were surprised, even though they lived in a very rural area, there was a path that by motorkar, you could reach the city of Pucullpa in three hours.  Morgan and I both got to ride in versions of this vehicle, one time pictured below, a passenger type and once in what would resemble a smallpick up truck bed, each attached to a motorcycle driven by a villager.
Additionally, they had access to some electricity in their village, and had a cell tower.   Completely speculation on our part, but we are assuming that the village was paid handsomely to allow the cell tower to be located in their village, and as an off shoot of that there was also electric run, at least as far as to where we were working. Again, we are assuming that the electricity came with the cell tower.  None of their homes had electric, nor did the church that we built, but we could use some power tools run off generators, like the chop saw and nail guns. Since I do not speak Spanish, and the Shipibo have their own language that is not Spanish, I was unable to find anyone that could help me get the real story. 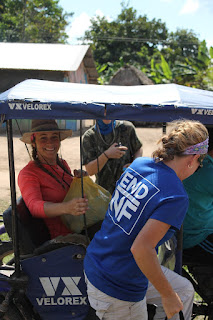 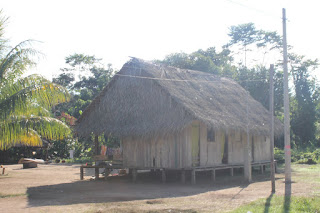 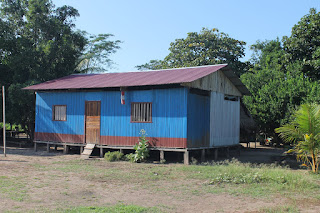 The women of the village make textiles, do beading and make pottery.  It is unclear to me what the men of the village do, or if they are even concerned about work.  Several men were present each of our work day to help with the construction and were clearly strong, smart and willing to do hard work, but there were also many that sat and watched from the sidelines.  It seems in my conversations that the men that worked alongside of us, were men of the church congregation, but again that was not clearly confirmed for me.

The history of the Shipibo people is one of great resistance and courage.  They were never conquered by the Incas, nor did they allow themselves to be colonized by the Spanish priests.  They live off the land and they use the provisions that are naturally provided to treat their sick,  and feed their people.  They have a strong spiritual, physical and cultural connection to the rain forest.

Of course this is only a scratch on the surface of this amazing village and its people.  A great starting point for me as I organize my thoughts.  Many thanks to Morgan, for faithfully capturing over 4,000 photos, it will be a few days until she gets them all posted and organized, but until then, I hope you enjoyed the sneak peak!

You can't make this stuff up!